Condrain was awarded the first phase of this project in February 2010 and second phase in December 2011. It involved the disentanglement, revitalization, and intensification of the 74.6 acre Downsview Provincial Government campus in northwestern Toronto.

Bounded by Highway 401 to the South, Keele Street to the East, and Wilson Avenue to the North, the provincial government complex was home to more than 2,300 public service employees representing eight provincial ministries.
The “disentanglement” allowed the site to accommodate the new Humber River Regional Hospital (HRRH), and a new 530,000 square foot Forensic Services and Coroners Complex (FSCC) for the Ministry of Community Safety and Correctional Services.

The average sewer depths for the project were 9.0m with the deepest at 14.0m including 750l.m. of 2250mm diameter concrete storm pipe which was installed along Wilson Ave. at 9.0m depth. Over 1.0km of road was reconstructed and more than 1,500 new parking spots created. In excess of 20,000c.m. of U-Fill was used as backfill, and more than 2km of jersey barrier was used for traffic delineation along with over 3km of fast fence. Over 75,000c.m. of contaminated fill was removed offsite. The project took more than 40,000 man-hours to complete.
The project was completed for the Ontario Realty Corporation/ Infrastructure Ontario at a total cost of $46.5 million. 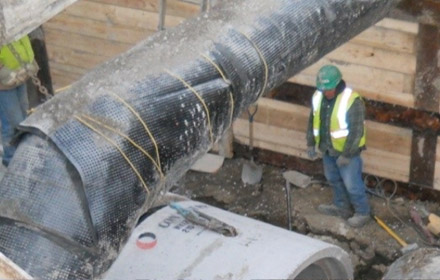