A flow diversion project was initiated to divert excess water from the Dundas WWTP capacity to the West Hamilton collection system for treatment at the Woodward Avenue WWTP.

The project was designed by the engineering staff at the Region of Hamilton Wentworth (now the New City of Hamilton,) and was ready for construction in 1999; however, the process was delayed while the amalgamation of the City and surrounding municipalities took place.

Condrain financed 2/3 of the project over an extended period, which was vital to its success. As well, it installed a reinforced concrete equalization tank measuring 57 metres by 33 metres, and 8 to 9 metres deep, which included a wash-down bucket system and a pumping station. This now acts as the projects main feature. A replacement of the existing Borer’s Creek sanitary sewer with approximately 500 metres of 1050 mm. diameter sewer, and a new 900 mm. diameter sewer was also constructed. These new sewers carry excess flow from the Dundas WWTP to the equalization tank. A 600 mm. diameter concrete pressure pipe forcemain -approximately 2 kilometers long- takes sewage from the tank’s pumping station to an existing sanitary trunk sewer at McMaster University. 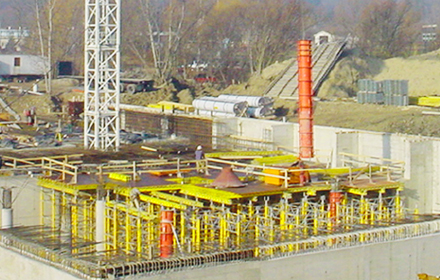